United Kingdom 24 August 2022 – Geraldine Ngonda the Paris based international gospel recording artist is set to minister at the forthcoming SYNERGY 4.0 event in London in September 2022.

SYNERGY is an annual gospel event organised by Evans Ogboi and it parades some of the biggest gospel artists in the United Kingdom and beyond.
This year’s edition holds on the 10th of September 2022.
Other gospel ministers lined up for this year include Evans Ogboi, Purist Ogboi and a host of other anointed gospel ministers. 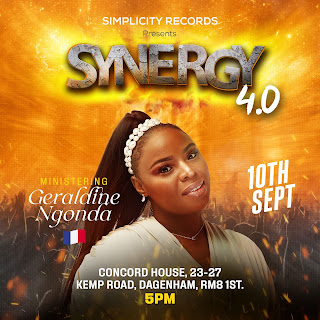 Géraldine Ngonda is a Gospel artist born in Paris where she currently resides. Passionate about music since her childhood, she began her career in church.

She quickly integrated the choir of which she took the direction a few years later.

In 2018, she released the album “Plus de tristesse” which is a mix of different musical styles such as gospel, soul and African rhythms but above all a testimony of her beginnings in the Christian faith.

Her consecration and spirituality have opened many doors and collaborations with French and English speaking singers and pastors.

These last two years have been rich in covers and personal compositions centred on the theme of “the presence of God”.

As a nurse and a Christian, the whole world has gone through a health and economic crisis. She had to be in tune with the message of this season.

Music: In The Beginning – Nyime