As trailblazers, Christafari is continually pioneering the genre of Gospel reggae in the U.S. and throughout the world. But the band is more than just musicians; they’re “musicianaries” (musical missionaries), spreading the message of hope and salvation globally with a relentless touring and release schedule. They’ve ministered in 85 nations, all 50 of the United States and released over 100 music videos.

BEGINNINGS:
Christafari was founded in 1989 by Pastor Mark Mohr. Raised in a Christian family, during his teens Mohr strayed from his spiritual upbringing and turned to drugs and alcohol, going as far as growing and even dealing marijuana. After running away from home, living on the streets, and hitting rock-bottom, he had an undeniable encounter with God that drastically transformed his world. At 17, Mark re-committed his life to Christ and took what he now calls his “Freedom Step” out of addiction.

At that point, his greatest desire was to help others escape the same bondage that once entangled him. He felt God leading him to start the first Gospel reggae band in America. Just two weeks later, the band was birthed at a camp talent show when a friend said, “So you’re not a Rastafarian anymore; you’re a Christafarian.” And the name stuck!

While their name may just sound like a play on words, in Biblical Greek it stands for a group of people who bear or represent the name of Christ. “At that time, the best advice I was given was to go to Bible College so I could be theologically and doctrinally sound,” says Mark, who attended BIOLA University, taking classes that emphasized pastoral studies and missions. During his college years, Christafari continued to take shape as Mark wrote songs for the band’s first three albums “Reggae Worship Vol. 1”, “Soul Fire”, and “Valley Of Decision”.

In 1999, after recording two hit albums with Gotee Records under the tutelage of TobyMac, Mark branched out and founded his own record company, Lion of Zion Entertainment, with the goal of “reaching the world through world music.” He later launched GospelReggae.com. 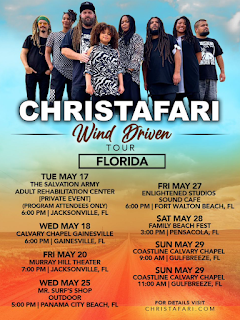 In 2002, while ministering in the Caribbean, Mohr met Trinidadian musician Avion Blackman. The two married a year and a half later and Avion joined the band full-time on bass and vocals. Avion comes from a very large musical family. Her father, Ras Shorty I, invented Soca and Jamoo music and trained over a dozen of his children to become his own backing band. She began singing lead on stage with her father at only four years old and started playing bass in his band The Love Circle at age 14.

Christafari is comprised of men and women from various continents, countries, and cultures who are true missionaries at heart and share a love for reggae music and passion for following Jesus to the ends of the earth.

CHART SUCCESS
Christafari is no stranger to chart success. Since the release of their first “Reggae Worship” album in the early 90s, most of their CDs have held high positions on both the Christian and/or Reggae Billboard charts. In 2012 Christafari made history as the first Gospel artist to hit #1 on the Billboard Reggae Charts with “Reggae Worship: a Roots Revival.” Each of the band’s 5 subsequent studio releases has also topped the Billboard Charts. However, speaking about the band’s chart successes, Mohr states, “We care a lot more about hearts than charts. Our passion is for souls, not sales, and we only do concerts as a way to make converts and fulfill the great commission.”

TOURING & MEDIA
Christafari has performed in 50 states, over 85 nations, at two Olympic Games and even for a President of the United States of America. The band’s first major tour was 1995’s Reggae Sunsplash, which had them traversing 46 cities in 53 days. Since then, they’ve performed at most major reggae and gospel/CCM festivals with the top artists in the genres. The group has had the privilege of performing at many of the country’s most prestigious venues like LA’s Greek Theater, Dodger Stadium, the Presidential Inaugural Ball, and even from the steps of our nation’s Capitol before a crowd of 500,000!

Christafari has been featured on The 700 Club, CNN, MTV, MTV Brazil, ABC, TBN, JUCE TV, BET, TBS, Greg Laurie’s Harvest, and many more. Their music is even featured in the current curriculum taught at Carnegie Hall. Christafari’s YouTube channel sees well over a million views each month. “Aside from touring,” says Mohr, “our greatest platform to reach the world is YouTube, so we’re doing our best to maximize it with the few resources that we have.” Over the last few years, Christafari has released roughly one music video per month through their Rank and File Film Co. 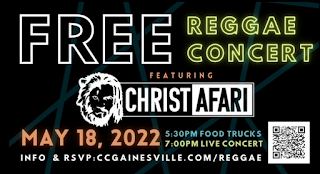 After the inception of Christafari, the band took several annual mission trips to Jamaica. “The funny thing is that one of my first prayers to the Lord after coming to Christ,” recalls Mohr “was, ‘Please don’t make me a missionary in the jungle in some Third World country.’” He now thanks the Lord for not answering that prayer – for it would quickly become the greatest desire of his heart.

After visiting places like Africa, Central and South America, and some of the most remote islands on earth, it became clear also to the rest of the band that these were the types of places that the Lord wanted them to invest their time and talents in from here on out. Their mission was simple: “To reach the lost at any cost and make disciples of every nation.” But the band quickly became troubled by the reality that Third World nations and developing countries couldn’t afford to fly out even a single member of the band, let alone their entire team.

So they became full-time musical missionaries – willing to travel to the ends of the earth in an effort to preach the Gospel through the universal language of music to those who could never afford them in conventional terms. Each of the members in Christafari has the same mission and vision, a commitment that requires tremendous sacrifice and discomfort. But this is right where they believe the Lord has called them. Seeing lives changed across the globe makes it entirely worth their while, and the results have been astonishing: in the last few years alone, the band has seen over 3/4 of a million decisions for Christ at their free outreach events! They are well on their way towards their goal of seeing one million decisions for Christ. 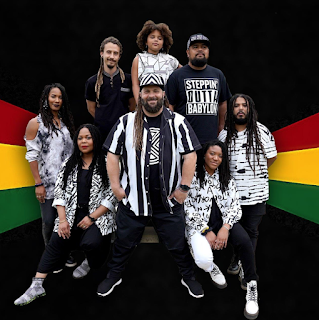 Not only does the band travel the world proclaiming the Good News of Jesus Christ through reggae music, but they’ve also set out to be the hands and feet of Jesus. They try to find and fill a need in each country they visit, such as outreaches in trash cities and slums, serving at orphanages, feeding the hungry, clothing the poor and ministering to those whom Jesus called “the least of these.” “Christafari’s mission is simple: to go to the ends of the earth until all have heard, and until all have heard we’re not quitting.” – Mark Mohr