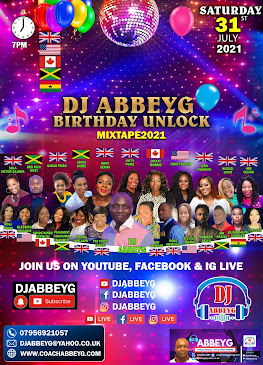 According to DJ Abbey G, the Mixtape is not like all those “corner store dj jockey thingy” you are familiar with, this mixtape has got soul inspiring songs that would take you from realms of glory to glory.
Watch Video Below;
DOWNLOAD HERE
ABOUT DJ ABBEY G
DJ Abbey G, an internationally renowned DJ based in the United Kingdom needs little introduction due to his popularity worldwide.
DJ Abbey G whose real name is Razak Komolafe resides in London and he has been a major force in the music industry as far back as 1996. He is currently an executive director at Gospelmania (a gospel-based promotion agency) located in the United Kingdom.
DJ Abbey G has worked with various artists from different parts of the world.  A highly skilled professional who prioritizes client’s satisfaction and ever ready to showcase their God given talents to the world.
You can connect with Dj Abbey G, on his website djabbeyg.com and his various social media platforms DJ Abbey G on (Facebook, & Instagram), subscribe to his YouTube channel.
Instagram: https://www.instagram.com/djabbeyg/
Facebook: https://web.facebook.com/DJABBEYG
YouTube Channel: https://www.youtube.com/channel/UCLYUwnKN3KiHm7ASt-vEdgQ
Website: www.djabbeyg.com
previous post