Chardon Myers the uber-talented Toronto based gospel music recording artist releases the much anticipated new single titled TRUST.
The new song features two other amazing artists namely Kiara-Patrice  and Patricia Shirley.
ABOUT THE SONG
The song TRUST, was written at a time when I was ready to give up on everything. I lost hope in myself, the people around me, my family and even God. I did not see the point in existing anymore. After a time of healing and restoration, God led me to a notepad and the first few words I wrote on the page were “I know You have a plan for me.” I cried. Heavy tears. Then I wrote the rest.
It is my hope and prayer that this “heavenly download” will give you strength, confidence and direction to fulfil all of GOD’S plans and walk in His purpose for your beautiful lives.
“TRUST” and believe…
Watch Music Video Below;
Available on major DIGITAL STORES
LYRICS:
I know you have a plan for me
And it’s working on the inside
I know you have a plan for me
And it’s working on the inside
Your ways are not my ways
Your thoughts are not my thoughts
Your time is not my time
So I will wait on you
I put my trust in You
I put my trust in You
I put my trust in You
Always
Do not lean on
Your own understanding
In all your ways
Acknowledge Him
Trust in the Lord
With all your heart
He’ll make your path straight
CHARDON MYERS BIOGRAPHY
Chardon Myers is a Canadian vocalist living in the city of Toronto. A fun, charismatic character to most, his influence and style reflects his love of Gospel, Jazz, R&B and Pop. His melodies reflect his upbringing and infuses the passion and hardships of real-life experiences.
Born in the island of Jamaica, Chardon Myers never forgets his roots of reggae music and the simplicity of the upbeat.
Chardon studied music at York University in Toronto and graduated with honours, receiving bachelors of music and education degrees. With that, he travelled across the seas to the United Kingdom and taught music at St. James’ Catholic High School in Colindale, London.
During his time there, Chardon formed a student band, called Half-A-Mile, and inspired a whole new generation of students to live out their passion in music. Returning to Canada, he decided to start his personal music project. Not only does Chardon sing and write music, he is an actor and background singer. He has appeared in musicals, such as Parade and Joseph and the Amazing Technicolour Dreamcoat.
He has appeared vocally on various projects and records, for example Powerless by Classified and apart of the choir for The Clark Sisters: First Ladies of Gospel movie. Recently Chardon was apart of Church on the Queensway’s play, The Azusa Street Mission, playing the role of pioneer Reverend William J. Seymour.
On December,18, 2020, Chardon joined with Redtones Studio Productions and released his first gospel single, Awesome God. It is upbeat and joyful, reminding his listeners how awesome God is. This anthem will ring throughout your households and listening devices for years to come. Keep on the lookout for more music and exciting performance endeavours. 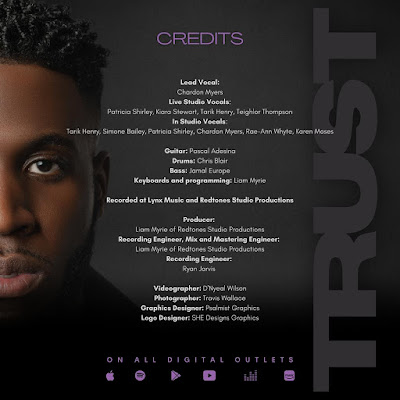 (Official Video) Give Him The Glory – Jemi Nwadike