Olubunmi Oduntan, popularly known as Bunmi Praise drops yet another soul-stirring and powerful worship song titled YOU ARE GREAT.

Ever since Bunmi Praise released her debut single ELOHIM ADONAI, she has become a force to be reckoned with in the gospel music industry worldwide especially in North America. 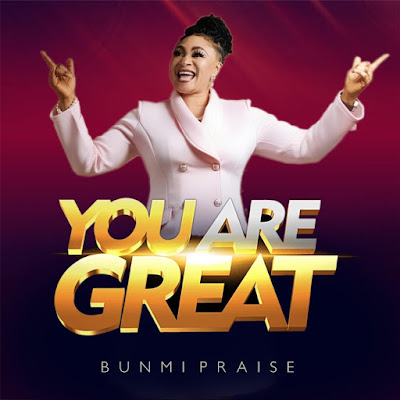 About the Song:
In the journey of life, there comes a time and season when we go through valleys of life. “You are Great” reminds us of God’s greatness at such times

Olubunmi Oduntan, popularly known as “BunmiPraise” is a singer, songwriter, and motivational speaker.

Her quest for fulfillment in music lead the way for her to become a member of Beejay Music where she continued develop herself musically, leading different choir and groups as a young adult. Before migrating to Canada, at a very daring period of her life, she was faced with an unforgettable experience in the hands of armed bandits where she nearly lost her life in this terrible ordeal. Through this experience, the Lord gave her a new song which has since been released as her 1st single – “Elohim Adonai”.

Given her ability to lead her audience and capture their heart, she has had various opportunities and invitations to sing in different musical events and concerts both in Canada and Internationally. She has been blessed to share the stage with other international and local artistes like Tim Godfrey, Todd Dulaney, Timothy Reddick, Sinach, etc. Her songs have been a tremendous source of inspiration to many as she makes a global impact.

Bunmi Praise is a multi-talented artiste, she hosts a motivational talk show “The Platform” on YouTube, she is also a Chartered Professional in Human Resource candidate who is persistently following her passion in music.

She is currently writing several songs working tirelessly in the studio for the release of her album.