His version of the song “Waymaker” written by Nigerian gospel singer/songwriter, Sinach, has held the No. 1 spot on Billboard’s Christian Airplay Chart for the past three weeks. More than 19 million people have viewed YouTube videos of Michael W. Smith performing the song, and fans all over the world have reached out to thank him for recording it.

“Here we are in this crazy, unprecedented time,” Smith says, “and I just think it’s become people’s go-to song. It gives people hope.”

Much of the international reaction has come through Facebook during the live shows he’s been doing from his studio in Tennessee every weekend for the past nine weeks.

“I’m getting most of the feedback from these concerts,” he explains. “It’s amazing. I feel like I’m playing stadiums with 100,000 people tuning in from around the world. And as I’m reading comments, there are so many about ‘Waymaker.’ People are quoting lyrics and saying things like, ‘You have no idea how much I need this song right now.’ Whether that’s in Italy or Zimbabwe or South Korea, I mean literally around the world.

Given the strong global response, Smith decided to record the song in other languages. He started with Italian.
“We obviously watched what was going on in Italy and I just woke up
on night thinking what if we did this thing in Italian? And I
immediately thought of Vanessa because her whole family’s from Italy.
(Vanessa Campagna is his back-up singer who accompanies him on
‘Waymaker.’) So, we brought in a coach and we did it. It was really a
lot of fun.”

Plans are now in the works to do the song in both Spanish and Portuguese.

Smith could tell very early on there was something special about ‘Waymaker.’

“I didn’t write the song,” he says. “I discovered it through my daughter, Anna, who was going through a bit of a trial in her life. She asked me if I’d heard this song called ‘Waymaker’ and I said no. So, she played it for me and I ended up recording it.”

(The song was written, recorded, and first made popular by Nigerian artist, Sinach, who released it as a single ahead of her 2016 album Way Maker (Live). Her music video posted on YouTube four years ago, now has more than 150 million views. Multiple artists have since covered the song. Smith’s version reached the top of Billboard’s Christian Airplay Chart earlier this month.)

He remembers being struck by the crowd’s reaction when he performed it live for the first time at a show at Bridgestone Arena in Nashville almost two years ago.

“Most people want to hear what they know and if you play a new song they’re usually like ‘whatever.’ But this time there was this kind of gasp in the audience and people were like ‘whoa, I’ve never heard this song before.’” 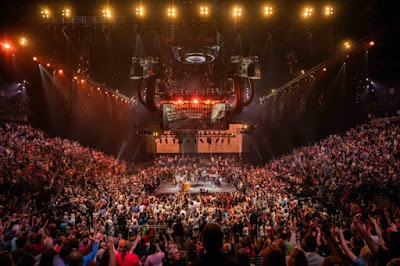 The live version has been available for a while, but then Smith was asked to do a radio version which tends to get more airplay. Instead of finding another well-known artist to record it with him, he asked Vanessa Campagna to do it, giving her the opportunity to showcase her “amazing” voice. That radio version the version now at No. 1.

For Smith, one of the most accomplished artists in Contemporary Christian music, this marks his 36th No. 1 song. He’s won three GRAMMYS, 45 Dove Awards and has sold more than 15 million albums. Last year, he was honored with a star-studded tribute marking his contributions.

Over the past two-and-a half months he’s stayed busy even while sheltering-in-place at his farm and studio in Tennessee.

In April, he did travel to New York to join Reverend Franklin Graham for a special Easter Sunday service in Central Park. Graham runs Samaritan Purse, a Christian organized that had set up and operated a coronavirus hospital in the park. Given that New York was a COVID-19 hotspot some in his family were concerned about Smith making the trip, but he felt it was important.

“It was very surreal, honestly. I wore a mask the whole time when I wasn’t singing, but you’re literally in Central Park and nobody’s there except Samaritan’s Purse Hospital which was incredible. I knew that inside those tents there were a lot of people who had the virus, but I never had any fear. I felt good about making the trip. And thankfully, I didn’t get sick.”

After returning home, he led 100 members a of local choir and worship team in a virtual performance of “Waymaker.”

Like so many artists, Smith is looking forward to getting back on the road and performing live shows. He just announced plans to headline a drive-in show at the Williamson County, Ag Expo Center in Franklin, Tennessee on Saturday, May 30th. (Tickets are $40 per vehicle and a part of the night will be dedicated to benefiting his Rocketown youth outreach facility, as well as tornado and COVID-19 relief efforts.)

He hopes there will be an opportunity for more drive-in concerts in the near future.

In the meantime, he’ll continue his live Saturday shows on his Facebook page and YouTube channel. (Times are 6pm ET/5pm CT.) Smith believes it is in the most difficult times that people need music, and the hope it gives them, more than ever before.

(e-book) A Cry In The Dark (My Journey From Fear To Freedom) – Melvin L. Latimer

Toronto’s Powerhouse Fellowship Soul Choir Appears in Netflix “Self Made”